Generally, a pendulum cord can be set by holding the cord short and slowly slipping it through the fingers whilst asking for the optimum length. At the point where the cord length is the best for you, the pendulum will move and this is the point to mark, tie a knot or slide the plastic adjuster to that point.

What is an energy pendulum?

An energy pendulum is basically  an energy device on a cord, and is used in a specified manner as a pendulum. It is popularly called a radionic  pendulum. [RADIONICS. The word radionics has been used in different contexts and generally relates to  healing at a distance using instruments. Traditionally a black box type of instrument is used in medical  radionics. Over more recent years the term radionics has been used in other forms of energy dowsing and also attributed to some pendulums. The term radiesthetic pendulum may well describe energy pendulums also. If  however, the device has the ability to be reset as with a dial or  equivalent, or recharging or charging, i.e. in  the case of the Mermet pendulum, Isis pendulum then it can fall into the broad term of a radionic pendulum. The Universal Pendulum is one such device, which combines the ‘black box’ principles with a pendulum]

Energy pendulums are constructed by observing the principle of the natural radiation of matter and geometric form. Geometry, and symmetry can be  seen in the design of an energy pendulum as a whole, as well  as in the structure of the materials used such as crystals and minerals. A pendulum with a cavity may also be  given a geometry or design through the make-up of the sample placed  within it. Homoeopaths utilise this principle to great advantage in not only determining the specific potency for an individual, but also in  transmitting it. The techniques in using energy pendulums are different to those techniques in using the more general pendulums.

THOUGHT  –  What properties does the pendulum have?

QUESTION  –  How do you know what someone needs with regard to a particular colour(s) at a specified intensity and for a finite duration?

ANSWER  –  The pendulum indicates this. 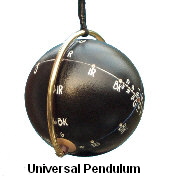 How to use a pendulum